How To Capture Scrolling Screenshot In Windows And Mac

Now PC and Mac have many features that make them more attractive to the user. Taking a screenshot is a widespread and favorite trick of users.

Sometimes, you don’t need the image of whatever is on screen only, but the picture of the complete page. It is the point where you need to take scrolling screenshots on Mac or PC.

How to Capture scrolling screenshot On Windows on a webpage

Windows provides you with many ways to capture a screenshot. Commonly you have to press WIN + PRTSC or Fn + PRTSC, and you will get a screenshot. There is also a built-in tool, Snip, and Sketch, through which you can capture a section of a window or pop-up menus.

But this is only for the screen that is viewable to you. What if you need to take a screenshot of the complete window, webpage, or document? In such cases, you need to use third-party applications.

Using Firefox, you can take a screenshot of a selected region. Or you can capture the entire page within your browser on Windows, Linux, and Mac with a built-in tool. You don’t need any plug-ins. Here is a detailed guide for your help.

Screenshot an automatically detected part of the page:

When selecting “take a screenshot,” you are in automatic detection mode. As you move the cursor, you will see highlighted webpage parts. It includes an image, content, title, advertisement, paragraph or text, and more.

As you select an area to take a screenshot, select copy to copy that area elsewhere. Or download and save it on your computer. Select “X” to cancel and return to the web page.

After that, you have the same option to copy it or save it. Or press “X” to go back to the webpage.

Screenshot of a visible portion of a page:

If you want to take the screenshot of the visible portion, go to the upper right corner, and select save visible. Like other screenshots, use copy or download and use “X” to cancel.

Screenshot region of a page:

The last way to take a screenshot in Firefox is to select the region of your choice. Click and drag the portion you want inside the screenshot. You will see the highlighted area as you leave your finger.

Use the same way to copy or download the image. After using any of these options, you can return to the web page. Firefox screenshot tool is easy to use whenever you need it.

Once you select GoFullPage, it will choose the entire webpage you are on. When you see the screenshot, you will observe it is long in Make Tech Easier’s case. You can edit, annotate, and download it as a PDF or PNG file. 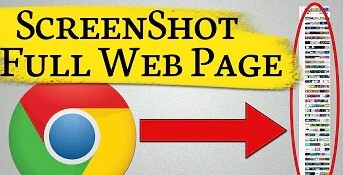 Windows’ native browser, Microsoft Edge, has a lot of good stuff. They include a great feature that captures the entire webpage.

To capture a scrolling screenshot, go to the three-dot menu at the top right corner of the screen. Select web capture, followed by capture full page.

Here you can draw and edit the image or save it. Or you can share it at once by clicking three dots at the top right corner of the screen. 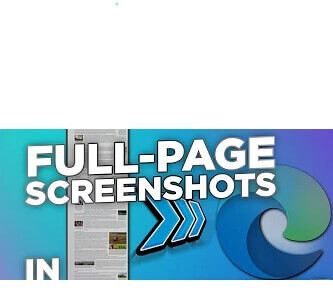 There are multiple screen capture tools available for scrolling screen capture on windows. You can download them and have significant benefits, including:

There are several open-source programs for Windows and Mac. They allow you to capture or record screen areas. You can also share screenshots or recording with a single key press.

There are also several all-in-one tools used to capture screenshots. They are very frequently used everywhere, like at home and in business. They have many features, like, a color picker and an intuitive image editor.

These features are very useful for different scenarios. You can customize your screenshots according to your choice.

Here are the steps to capture screenshots through such apps:

Other best tools are more focused and sleek. Those are image editing software made for consumer needs. With them, you can create visual instructions.

You can also capture active windows and add an explanation to your simple tweak. It also boasts editing functionalities.

How to take a scrolling screenshot on your Mac

Mac or IOS computers have an easy-to-use operating system. If you want more advanced features, then it is a good option. Sometimes you need to capture a screenshot for future reference. But the screenshot will take one picture at a time.

There are some more steps to complete the full-page screenshot:

The Mac OS has built-in features for taking a screenshot. But you need to adjust the browser magnification level. Do it when you try to take a screenshot of the entire webpage. Following are some steps to capture an entire webpage on your Mac:

How to copy text from a scrolling screenshot on your Mac

Different apps help you to take a screenshot on your Mac. It is an effective way to extract and organize the text that is not editable on your Mac screen.

Follow the given steps to copy text from a scrolling screenshot:

How to take a full-page screenshot on Mac

Other ways are available to take full-page screenshots rather than keyboard shortcuts. You can use any third-party app that is suitable for your Mac OS.

We believe that this article will help to capture scrolling screenshots on windows as well as on Mac. There are many applications available today.

You can use them to take scrolling screenshots. Because today it has become a need and part of your work to take a screenshot for your future assistance. Hopefully, this guide will contribute some ways to make your work easier.

How Do You Screenshot Scrolling?

– Now right-click anywhere on the screen and scroll down to select take a screenshot from the list.

– You will be given capturing screenshot mode. You can take screenshots in multiple ways.

How Do You Take A Scrolling Screenshot In Chrome?

– Go to the webpage you want to capture

– Open the three-dot menu at the right corner of the screen.

– Tap the run option command in the menu.

– Search for the screenshot.

Can You Take A Scrolling Screenshot On Your IPhone?

Yes, you can take a scrolling capture on your iPhone by following the given steps:

– Go to the page you want an extended screenshot.

– Tap the power and volume up button like you do to capture a screenshot.

– Touch the screenshot floating thumbnail on the bottom left corner.

– Switch to the full page tab to take a scrolling screenshot.

How Do I Take A Screenshot Of An Entire Webpage?

– Go to the webpage you want to screen capture.

– Go to the page options menu in the status bar.

– Now you can download the long screenshot directly on your desktop.